It’s A Phone! It’s A Tablet! It’s A PadFone X (With WildTangent)!

You can now get a new tablet/phone combo with the WildTangent Games app pre-loaded from AT&T!

If you’ve ever had a hard time deciding between getting a tablet and a phone, then this is the device for you. It’s a phone/tablet hybrid. 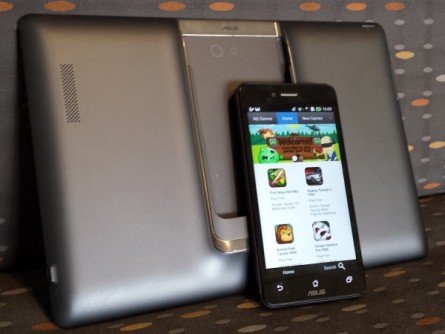 Here you can see how the phone docks into the back of the tablet.

Not only does it perform well (according to Engadget), but it will save you money. It’s only $199 for both a phone and tablet. In addition, you only need one data plan since it’s technically one device.

The versatility (and the price, I admit it) are very appealing.

I’ll bet these other features will have you interested, too:

It’s fun, different and a clever way to combine two great devices. And it’s a great price. So, if you’re in the market for a phone and a tablet – then this is the hybrid for you. Don’t forget, you can get your WildTangent Games fix on it, too.